Well its now less than 12 months to the 2mm Scale Association's
Expo 2010 when those of us who have entered the Golden Jubilee
Layout Challenge will show our masterpieces.

Progress on my entry, "Marks Quay", has been at a snail’s pace
for about 2 months now as I had a period of modeller's block.
Two major issues were causing me concern and I had not
resolved the way forward. These revolved around the not so good
running qualities of the fine scaled Bachmann switcher loco and
the train table being too short.

As I have written earlier in these posts, I have based this
layout on the principals contained in the Association's
"Beginners Guide". Mark, the author, recommended and used
himself the Bachmann switcher as easily converted to fine scale,
cheap and generally a good reliable runner.

Knowing Mark as I do, I had no reason to disbelieve him and
having seen many of his excellent models had no doubt that this
was the way to go. Initial running of the loco on the
'unconcreted' layout suggested that he was correct. Using a
Pentroller the loco ran smoothly and slowly and shunted very
well. As time has gone on and I have filled in the tracks to
represent concrete infill, the running has got worse. In my
mind I blamed the infill and have spent hours carefully
clearing out the area next to each rail to ensure the loco was
not running on its flanges and that pick up was not
compromised.

All to no avail as little improvement was achieved. The
narrow gauge loco was still running fine so why did I not
suspect the Bachmann? I don't know! Anyway this week
I took a closer look at the problem and clearly the track was
not at fault. With input from David Short we determined
that the loco was at fault as it would not run much better
on unballasted track.

A close look at the underside of the loco revealed that the
wheels were not in line. This loco has side mounted pickups
which wipe the wheels and are screwed to the chassis.
Bachmann use a split frame chassis for this loco. Each pick
up was bent differently, probably when I was trying to get
it to run better. There is quite a bit of side play in the axles
which helps get the loco round some of the sharper curves.
The down side is that two axles where pushed to the right
and one to the left and the wiper pressure was too high. 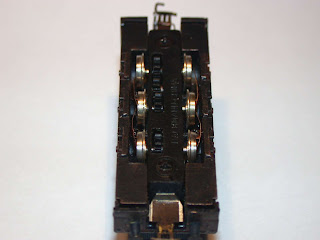 There are two pickups per side bearing on three wheels
and the two centre pick ups were overlapping by a small
amount. I removed the wheels and wipers and cleaned
them all, shortened the centre ends and re-bent them to
reduce and equalise the pressure. Once replaced in the
chassis the transformation was remarkable. The loco
ran smoothly and slowly with hardly any hesitation.

I have decided to replace the strip pickups with
phosphor bronze wire to hopefully reduce the pressure
further and improve the running again. I'll post again
shortly on how it's worked out and also what I propose
to do to improve the train table.
Peter Whitehead
Posted by Peter Whitehead at 23:23

One (slightly bonkers?) way to improve pickups is to fit gold at the end where the contact is made.

Gold sources would include some circuit boards with gold plated edge connectors, thin gold in jewelry (suggest 18c) and being on very good terms with a dentist.