If you read my previous post you will know I had decided to replace the Bachmann pick-up wipers with some of my own.

I first drilled a hole for the fixing screw in a piece of thin brass, then I cut a thin strip off, including the hole. A piece of 33 swg phosphor bronze wire was soldered at right angles to this as shown below. 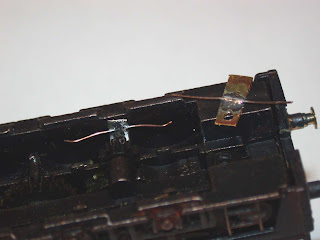 The strip of brass was bent at right angles close to hole and the phosphor bronze wire was shortened and curved before fixing it in place. I curved it so that the cut (sharp) end was not bearing on the wheel. 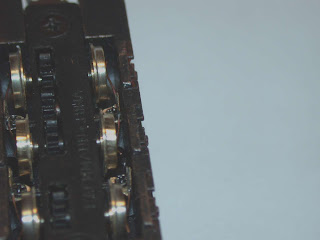 Three more were made although I decide to make two of them bear on one wheel only to reduce drag. After a bit of adjustment the wheels are more in line than before and the wiper pressure is minimal.

The result was a transformation in the running qualities of the model. It starts and stops reliably, and runs slowly and smoothly. The effort was worth it and I am happy with the result.

David Short brought his 'Bachrus' locomotive running stands (rolling road) over and we ran it on them. I had hoped to show a video of the effect the new pick-up wipers have had but because you can't see the wheels behind the side skirts it looks as though nothing is happening.

Instead I ran a Farish pannier tank which was fitted with a Bill Blackburn chassis conversion. This loco definitely needed running in and is doing so as I write this. It has quietened a lot and is running much better although you will see from the video that I have a wobbly wheel on the centre axle which requires attention.

Posted by Peter Whitehead at 17:20