This posting is a bit delayed but better late than never. The DEAG met
as usual for tea and cake and although we were down on numbers lots
of modelling was being done, even our host managed to do some work
on his Midland Coke Hoppers between serving drinks and cake. 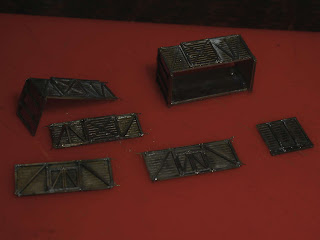 Nigel brought along some Chris Higgs, LNER Gresely etched coaches
which are coming along nicely. He was working on seats and partitions
for the interiors using extruded plastic seat strips and plastic card. 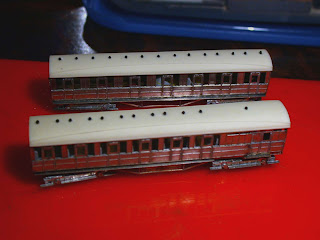 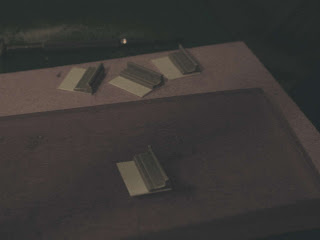 Bill brought his wheel press along to put some tyres on wheel centres
or was it wheels onto axles, either way they are destined for the
Association shop. 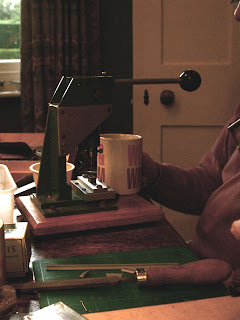 In my post dated 16 December 2008 I showed a photo of Tony's
'bread board' work board. This has now been supplanted by an
upmarket board with silver ball feet and pre-fitted magnifier,
vise, "helping hands" clamp and a nifty use of a piece of wood
moulding to lay stock in whilst soldering. 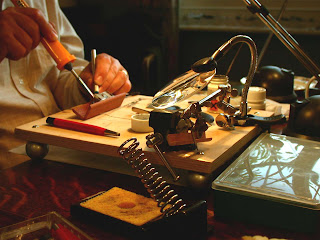 David E is still batch building wagon chassis. This is something
I have done in the past and although it can be a bit repetitive
you can get a lot done by doing it this way. The bodies can
similarly be batch built as can the painting and lettering and
then your wagon fleet is suddenly increased!

As I had nothing small to make for 'Marks Quay', I made a start
on a Chris Higgs GWR Toad brake van. I had intended to continue
work on the shunter's truck that I started at the previous meeting
but somehow left the fret of unused parts at home! 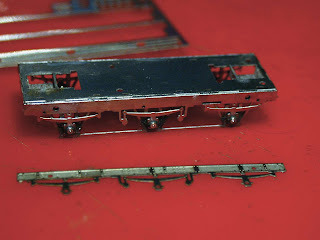 It has been a while since any posts to this blog, for my part I have
had a period of modellers block but this has now gone so hopefully
I will be posting again soon.

Apologies for the photos, my camera sems to be unable to cope with
low light levels!
Posted by Peter Whitehead at 23:16

Re Nigel's coaches. How did he produce the roofs? Are they pre-formed plastic extrusions and if so, any idea where he got them from? Thanks and Best Wishes,
Terry Kempton (Fairly newish member!)

The roofs are resin castings and were part of the kits.

Probably manufactured by CMA Mouldform if you wanted to ask them how to get some to your own designs.