Since the last post, I have been busy laying DAS surface to the baseboard.
It goes down quite quickly but leveling it has proved to take more time.
Initially I used a straight edge dragged across the surface to try to
get it level but sometimes the DAS would stick and peel off the baseboard.
I tried wetting the surface and although this helped I felt that I was
risking getting too much moisture into the baseboard. In the end
I relied on finger pressure to do most of the work. 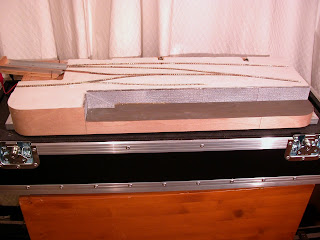 Once the DAS had dried, I filled any obvious dips and let it dry out further.
I then sanded the surface to give a more level and flat finish, even so
it is uneven in places but I think I can use this to my advantage to give
the impression of an old, damaged concrete surface. 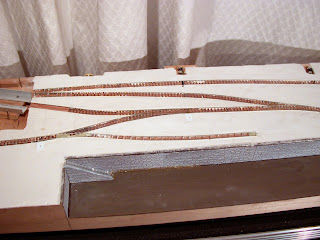 A thorough clean of the rails and sleepers followed by some test running
has shown that a little further work was required to remove some solder
from the inside of the rail. I also reduced the diameter of the standard
gauge loco wheel flanges as they were all over size by up to 0.1 mm,
and they were catching in places. This has resulted in vastly improved
running. The narrow gauge loco ran fine.

I am now experimenting with a system which will help me lay DAS
between the rails. It will have to cut a gap for the wheel flanges, and
trim the surface so that it is below the rail top.

I shall be taking Marks Quay to Alexandra Palace on Sunday
29 March, on the 2mm Association stand, so come and take a look.

This is starting to look very nice! Would some sort of roller gauge be useful for the between track sections? Two flanges on the edges could cut the flangeways for the wheels and the slightly indented centre would produce a flat middle section.

Thanks Tony, it still looks messy to me but then I see it close up!

I had been thinking along the lines of a block with a sharp cutting edge, and two pieces of sharpened rail soldered to the sides to push along the track. I like your idea of a cylindrical roller gauge to fit between the rails, sounds easier to use than my idea.

Keep an eye on the blog and see how I get on.