Marks Quay at the London Festival of Railway Modelling

Sunday 29 March saw me taking Marks Quay along to Alexandra
Palace to spend an enjoyable day on the 2mm Scale Association's
stand. We had two tables so Alan Smith and David Short
demonstrated Easitrac and Versaline track making respectively.
As you can imagine this attracted lots of interest and the point
track bases for the Easitrac system generated lots of discussion.

On the other table I set up Marks Quay next to the publications
and display material, and enjoyed a running session.

It was great to chat to so many people and the layout received
a number of complements which is always a spur to get on and
finish things. Also I gained lots of ideas on how to progress things
and these will be documented in future postings.

In the meantime here is a photo of the layout and this link will
take you to some pictures of Wansbeck Road (Mick Simpson)
and Copenhagen Fields (The model Railway Club), also at
Alexandra Palace. 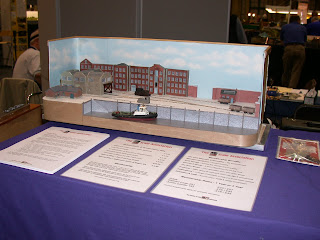