A very long time ago (about 3 years!) I posted here about an ex-LMS class 11 diesel shunter I had been building from the 2mm Scale Association's then new kit. Guess what - I'm still building it, but things have progressed a little... although not by much in the last 2.5 years as other projects have captured my limited attention.
So why the update now? Somebody wanted to know about how I installed the DCC decoder that I was getting round to in the last post, so here are a few piccies to illustrate what I did.
The decoder is a CT-Electronik DCX-75. This is a single sided board, and very thin. Its width is the same as the outside width of the loco frames, so it can sit comfortably on top of the frames and between the wheels - as can be seen in the photo below. Attachment is by double-sided sticky tape. There is plenty of room below the motor (or "boiler" as I keep wanting to call it!) 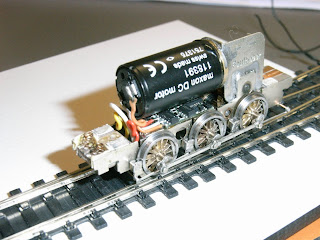 Red and black wires attach to the top of the PCB frame immediately in front of the decoder. Orange and Grey to the motor. The yeallow and white wires provide this decoders only two function outputs (return must be to the track).
I wanted the function outputs to power lights (cab light and marker light) on the loco, but still retain the facility to separate the body from the chassis. This is achieved by the two phosphor bronze springs which appear to be poking up from the front spacer. What you can actually see is a very thin PCB pad glued on top of the front spacer, and insulated from it and the side frames by paper (probably a shred of post-it judging by the colour!). A close up is below: 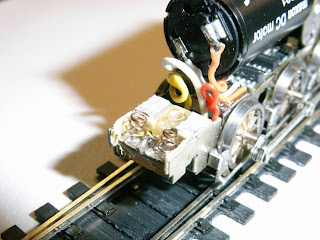 The wires reach this pad from below, accessing it through small holes in the front spacer: 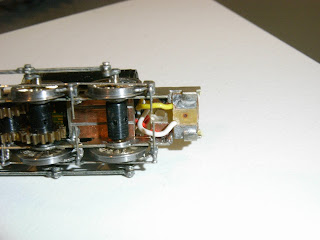 The underside of the PCB footplate has been gapped to form two large pads that the springs push against to transfer power to the LEDs: 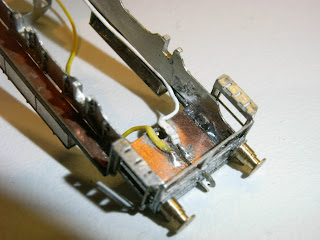 The return path is via a suitable resistor, to the cosmetic outside frames, which though attached to the underside of the footplate, are live to the chassis sides when everything is assembled. 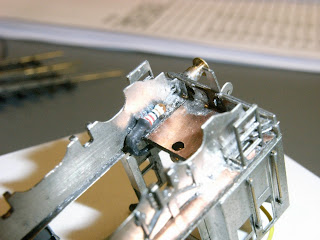 The positioning of the decoder relies on the fact that I have not added the optional idler gear between the front two axles. There may also be room on top of the motor for a very thin decoder such as this. Another option would be to put a shorter, fatter decoder upright in the front of the bonnet - a DCX74zD should fit there, but at the expense of being able to easily separate the body and chassis.
Posted by Nick M at 00:13