Progress on the challenge layout has been a lot slower than originally anticipated due to various reasons. However most of the track has been built using the solder construction method. I have learned a lot about track configurations and construction along the way. Unfortunately construction had already been commenced when the Easitrack system appeared in Shop 1. However I will use it for the next layout based on Ongar on the GER (I have a deadline of 2015 for that one as it will be the 150th Anniversary of the line!) 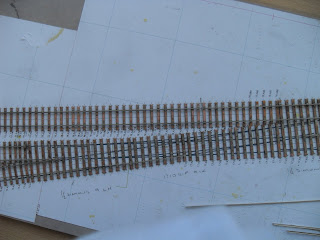 The photo shows construction of the single slip, and after a silly mistake (not looking at the template sufficiently) construction is moving along quite quickly. The Easitrack jigs make filing the rails for the V crossings very easily. 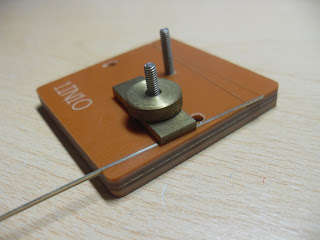 I have purchase 6 turnout operation mechanisms from Shop 1 to operate the 6 turnouts on the layout. I have not decided what method I will actually use to operate the turnouts yet; I am leaving my options open.
Once all of the track is complete I will start laying it on the baseboards. I plan to use insulation boards which are approximately 1200mm x 500mm x 52mm and purchased from B & Q in a pack of four for £20. I plan to edge then with thin ply.
When construction of the boards starts I will post some more photos.
Posted by David Short at 22:40