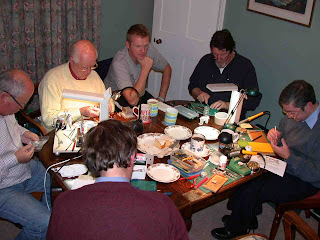 On Thursday some seven DEAG members got together for our monthly meet. We offered our congratulations to Nigel for being elected Chairman of the 2mm Scale Association at the recent AGM in Bedford. Also congratulations to Bill for winning the John Barker Trophy (Best Rolling Stock) at the AGM, for his East Anglian PO wagons, see photo below.

More pictures of the models shown at the AGM can be found here.

On the'crowded' work table this month:

Nigel - Dismantled the Copenhagen Fields J50 shunter for a much needed overhaul and experimenting with one piece, all steel (11 thou guitar string) loops for DG couplings. The one piece loop and dropper were working well under experimental conditioned. It remains to be seen whether the view that the whole thing will become magnetised and therefore not work, really happens. It was certainly easy to form the loop / dropper and I think it will be worth trying out on Marks Quay. 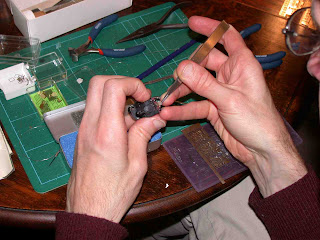 Tony - Has developed his work board further with the addition of extra clamps and also the soldering iron stand is now firmly fixed to stop the weigh of the iron making it unstable. He spent the evening working on a GER cattle wagon chassis, from an Association kit. 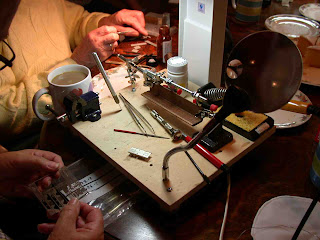 Bill - Bill brought along a rather large jig for making square wagon bodies. It consisted of a large cube of aluminium for the base (a chunky L shape) with a vertical fence added. He used this for holding the wagon sides square whilst the solvent did its work. 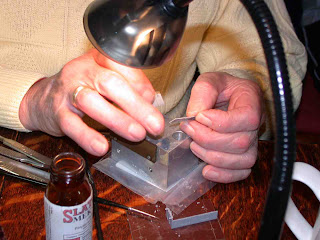 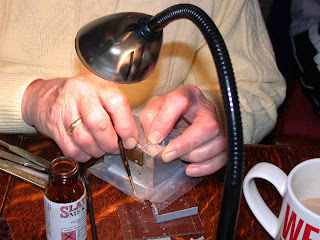 Stuart - Working on making links for his magnetic three link coupling system. This is fully described in the Association magazine of December 2008. 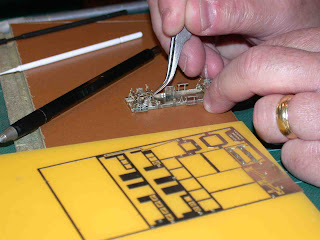 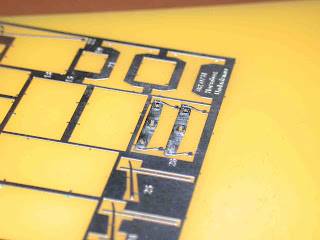 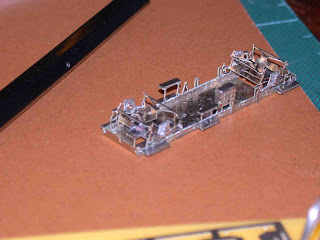 Peter - I was working on a GWR shunter's truck from the Chris Higgs range. I have encountered two problems so far, the fold up axle boxes do not seem to fold in half as the etch line is not central. As a consequence I could not get them to sit right on the W irons. I have decided to use cast ones for this kit. Also the instructions told me to fold up the buffer beam (part of the main chassis) followed by the brake hanger. Unfortunately if you do this the brake hanger fouls the folded buffer beam and cannot be folded down below the chassis. Reversing the fold order sorted this problem.

Our host Melvyn was reduced to huddling in a corner! The portable workbench? 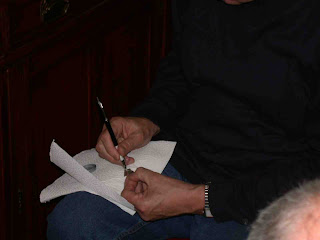 Posted by Peter Whitehead at 09:14