January's DEAG meeting saw a good crowd gathered round the modelling table, some eight members being in attendance.

Following on from the "is this the smallest workbench in 2mm" question last time now we offer the smallest 2mm layout! Tony Kennedy produced this model based on 'Little Dungmoo' on which stands an as yet unfinished cattle wagon. Phil Mead has entered the layout fray with some beautiful curved track / point work using Versaline track components, available from the Association Shop. The track plan has been designed and plotted using Templot, the track being built on top of the printed track plan, using Association track gauges as necessary. Hopefully more of this will appear in due course now that the ball is rolling. 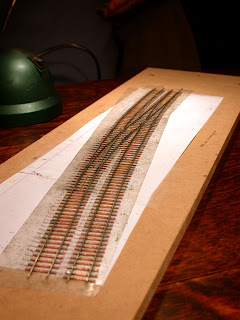 Also from Phil, is this LNER Toad chassis from the association kit, which looks very nice. Can't wait to see the finished item. Nigel Cliffe brought along his DCC controlled coupling experiment which is looking very promising, having got the Alex Jackson coupling to work he is now experimenting with the DG coupling. I'm sure Nigel will be posting more on this exciting development in the future.

As for the rest of us little modeling and lots of chat this time!

I have been getting on with a model of a Clyde Puffer of which more later but here is a photo to be going on with. It is a GRAMODELS resin kit which can be found under 2mm buildings, strange but true. 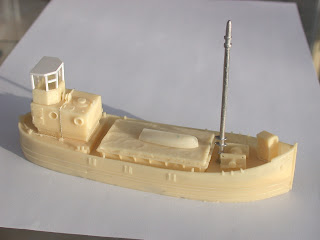 Finally here is photo of the excellent Oxford Diecast Bedford OB coach which I tried to photograph at the last meeting but could not get a decent, in focus, close up of. It is also available in Southdown green. 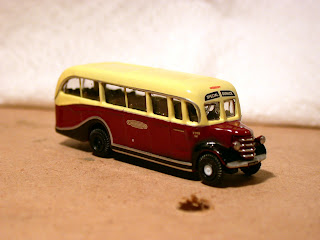 Posted by Peter Whitehead at 10:36

The DG version was working at the meeting.

I think its too subtle for people :-) - it does DG, BB, AJ and Electra, any of them, does not matter what your stock has fitted, the loco will couple and uncouple from any and all of them.