The Metcalfe range of building kits include some industrial/warehouse type buildings which I felt would suit my purpose.

As ever I could not leave them as standard and started modifying them as I built them. The kits are of course for full buildings whereas I wanted some of them to be low relief. That is only part of the building set against the back scene. The reason for doing this is lack of space and is a common trick used by railway modellers.

I used (Warehouse & Mill Product Code: PN107) to represent Victorian warehouses which in my world were the original buildings on Marks Quay. To add interest I have photocopied the corner stones and added these to the kit to give some 3D effect, it also covers up the joint as the printed paper inevitably splits at the corners. I intend to cover the backs of these buildings with black paper so that the sky backscene in not visible in the windows. The layout of the building also hides the switch which operates one of the points. 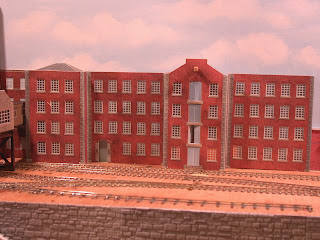 I had enough bits from the kit to build a small building to represent the security building at the entrance gates. This is also designed to hide a point operating switch. 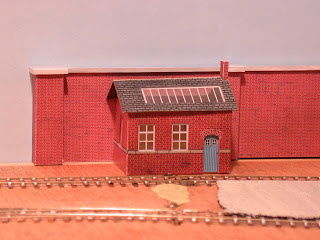 I then added (PN119 Industrial Buildings) as assumed additional buildings erected during the second world war, hence the different styles. Again I photocopied some of the kit to enable me to change the shape of the building. A check of the Metcalfe website suggests that they have discontinued this kit, though it seems to still be available from any number of model shops. Also it had to bridge one of the tracks. To do this I have used some parts from a GEM Fleetline lattice girder bridge white metal kit and I am pleased with the result.

None of the buildings are complete yet, requiring things like capping stones, ridge tiles, gutters and downpipes etc., etc. so a further post will be required later. 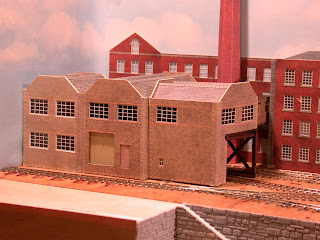 As you can see from the photo above I have replaced the card (loading bay) doors with some planked plastic sheet as I feel this improves the look. Also I have filled in a door with brick paper and in due course a flue pipe will emerge from this, I imagine a boiler installed the other side, hence the door being filled in! The part of the building to the right hand end has been modified to be tapered, the original was square. This was to help hide the train table behind and also to add more interest, I can see the standard kit on other layouts if I want.

In the background is a scratch built chimney, using Metcalfe brick paper. It is hexagonal in plan and was a b****r to build, sticking the brick paper on was not easy either. I am not entirely happy with it and may change it before the layout is complete.

Click on the following for links to useful websites: