Thursday 18 September and another meeting of the DEAG arrives, where has the year gone?

David E brought along Framsden, his entry for the Golden Jubilee Challenge (GJC), on which much progress has been made. The first picture shows the overall layout and I think it is striking how well the back scene and the scenics on the baseboard blend together. David's artistic skills certainly show well I think you will agree. 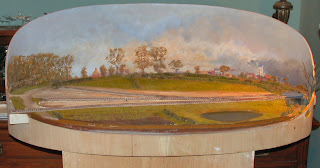 The second photo is a close up of the right hand end of the layout showing some of the scenic details. 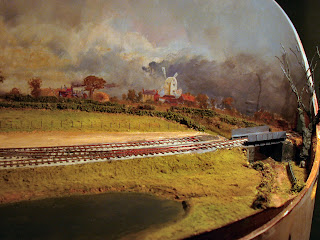 Compare these with the photos of the layout in the February 2008 meeting posting and you will see that considerable progress has been made. 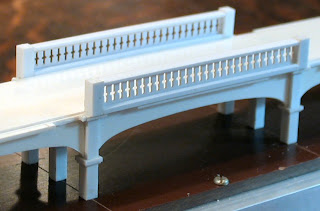 Posted by Peter Whitehead at 12:27

It's good to see so much happening down yonder. David's little layout is shaping up rather nicely; his artistic approach is a lesson for us all. I've only seen the first board of Bill's layout (at last year's AGM), but already it is an inspiration; just look at that bridge! Even in its unpainted form it looks so convincing, so real. Brilliant!