In my previous post I alluded to the fact that I had not done any modelling for over three months, although this was not strictly true. During my mostly weekly modelling evenings (Thursday) I have been plugging away and the results are that I have produced a new train table and have been making progress with the Puffer.

When I last posted about the train table I think I was happy with the result. I subsequently found that with the back scene in place I had to remove the loco from the table before I could add a wagon! Not ideal so I decided to make a longer train table. This killed two birds with one stone so as to speak, I would have room to add stock without having to handle the loco and I could replace the aluminium angle with proper track. 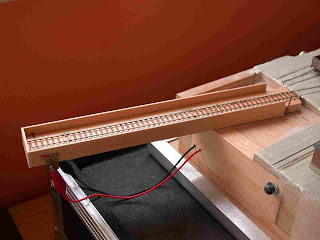 I had recently replaced the curtains in the modelling room with IKEA blinds and as a result had some slats left over. Not being one to throw them away I made the train table from laminated slats with sides cut from a slat halved down the middle. The result is a strong table which cost me nothing. The track is some plain rail track work I had in my spares box and I wired it to the brass tags taken from the old table. I was concerned that I would not be able to get it to line up with tracks but in the end it worked out OK and runs better than the previous version.

I am now working on some stops to aid with accurate track alignment as 'by eye' does not always work too well!

I have also been progressing the Puffer for the harbour and although it is not finished yet I have added a photo to whet your appetite. More on that in a future post. 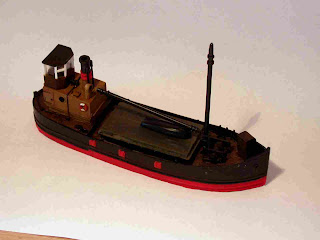 Now that I am back in the groove, I hope to be posting more regularly although who knows now that the Challenge is no far away, modelling must take priority.